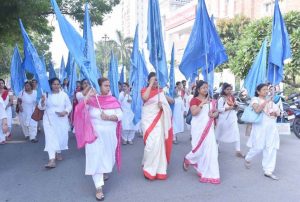 Lucknow, 1 October : City Montessori School celebrated Gandhi Jayanti in a big way with a plethora of educational-cultural items organized here today on the eve of Gandhi Jayanti at CMS Gomti Nagar Extension Campus auditorium. Singing the favourite bhajans of Bapu and resolving to follow in his footsteps to make India a great nation and to realize his dreams of making the earth a better place, they created an atmosphere of reverence and harmony fit for the auspicious occasion. The programme was set into motion with the lighting of the lamp ceremony by the Chief Guest, Mr Pravin Kumar, Editor, Times of India and garlanding of the portrait of Father of the Nation, Mahatma Gandhi. Addressing the august gathering of teachers gathered here, the Chief Guest, Mr Pravin Kumar said that the relevance of the teachings of Mahatma Gandhi today can be gauged from the fact that the present government is successfully running two significant programmes in society, the Make in India Programme and the Swachh Bharat Campaign and both these are inspired by Gandhian philosophy. He was extremely overjoyed to see that CMS is following the teachings of Gandhi and spreading them in all corners of the world. This is of utmost importance in the present times, he said.

Renowned educationist and CMS Founder, Dr Jagdish Gandhi said on this occasion that the ideals of truth, ahimsa(non-violence)  and self-sacrifice preached by Mahatma Gandhi are the only way to bring about unity, peace and justice in the world. Global problems can be solved only through World Unity and World Peace. Now the time has come to give a concrete shape to the thoughts of Mahatma Gandhi and make his dreams come true. The gathering was also addressed by the CMS President and Managing Director, Prof. Geeta Gandhi Kingdon. She said that Mahatma Gandhi’s teachings are just as relevant today as they were earlier and will remain so in years to come. CMS Founder-Director,Dr (Mrs) Bharti Gandhi delivered the Vote of Thanks at the end of the function.