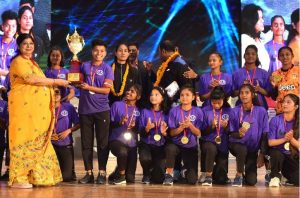 Lucknow, 22 December : The five-day International Football Tournament ‘CONCORD-2022’ organized by City Montessori School, Station Road Campus came to a magnificent closing with the Vishnu Bhagwan Public School, Prayagraj winning the Girls’ Championship Trophy and Amenity Public School, Uttarakhand bagging the Boys’ Championship Trophy. Olympians, Runner-up teams and other best players were awarded at a grand closing ceremony held at CMS Kanpur Road auditorium. The outstanding young footballers were awarded in different categories as well such as Best Player, Best Goal-keeper, Best striker, Best Scorer etc. It may be mentioned that ‘Concord-2022’ was organized by CMS Station Road Campus from 18 to 22 December in which students from various states of India enthusiastically participated and proved their sports talents.

At the closing ceremony of ‘Concord-2022’, the CMS Founder and renowned educationist, Dr Jagdish Gandhi blessed the young players and said that it was not important as to who won or who lost, but far more important were the values learnt here and the spirit of good sportsmanship inculcated by participation in this Football Fest., as these values will stand the students in good stead throughout life. Convenor of CONCORD-2022 and Principal of CMS Station road Campus, Mrs Deepali Gautam said that Such competitions bring out hidden talents and give the nation top class sportspersons.

Earlier, in the girls’ final match, played at the CMS Jai Jagat stadium, saw a tough fight. The final was played between Vishnu Bhagwan Public School, Prayagraj and City Montessori School wherein Vishnu Bhagwan School won the championship by 5-0, registering victory in a one sided match. The girls of Vishnu Bhagwan School played attacking football from the beginning and took a 1-0 lead in the first half. Their aggressive play continued in the second half and they scored 4 goals to take a 5-0 lead and won the girls’ category championship. Although the CMS team created many opportunities to score goals but could not succeed in breaking the defense of the opposing team. Anchal Patel of Vishnu Bhagwan School, Prayagraj was declared the player of the match for her outstanding performance while Drishika Pandey of CMS was declared the ‘Player of the series’ for her exceptional play through the tournament.