Lucknow, 21 November : The Deputy Chief Minister of UP, Shri Brajesh Pathak and the Industrial Development Minister, Shri Nand Gopal ‘Nandi’ profusely praised the ‘International Conference of Chief Justices of the World’ while speaking on the fourth day of the conference and sent their plaudits to the convenor of the conference Dr Jagdish Gandhi. A magnificent ‘Cultural Evening’ was organized to evening at the CMS Gomti Nagar Extension auditorium in honour of the judicial fraternity and dignitaries arrived from 57 nations to participate in this historic conference. The Chief Guest on this occasion,  Shri Brajesh Pathak, Deputy Chief Minister, UP, lit the lamp to formally inaugurate the ‘Cultural Evening’. While addressing the gathering on this occasion, Shri Pathak said that the steps taken up by CMS to establish unity and peace in the world and giving opportunity to children to raise voice for a safe furure, is highly praiseworthy.Prior to it, the proceedings of the fourth day of conference saw a formal opening by the Industrial Development Minister, UP, Shri Nand Gopal ‘Nandi’ at CMS Kanpur Road auditorium. Shri Nandi said on this occasion that the welfare of the world humanity can be achieved by following the ideology of ‘Vasudhaiv Kutumbkam.’ The principle of ‘Vasudhaiv Kutumbkam’ is embedded in the basic concept of India and all Indian rituals end with a chant calling for the welfare of the whole world. The world welfare is possible only through this idea. Issues of environmental protection also must not be ignored. It is worth mentioning here that City Montessori School is organizing the ’23rd International Conference of Chief Justices of the World’ from 18 to 22 November which is being attended by Presidents, Prime Ministers, Speakers of Parliament, Law ministers, justices of international court and over 250 Chief Justices, judges, and legal luminaries arrived from 57 nations.

On the fourth day of the international conference today, the judicial fraternity and other esteemed guests deeply exchanged views over the theme- Creating Culture for Unity and Peace, Establishing Rule of Law, Human Rights, Global Governance Structure, Tackling Global Issues and Sustainable Development. Theme ‘ Human Rights’ covered the topics like creating awareness for and protection of Fundamental Human Rights, Violence in and Against children, Rights of Children, and Rights of Women and Gender Equality etc. Mr Hari Om Sharma, Chief Public Relations Officer of CMS informed that the in-depth conversation and thoughtful deliberations held during this four-day long conference of jurists and legal luminaries arrived here from across the globe, will culminate into ‘Lucknow Declaration’ to be declared tomorrow on 22nd November 2022, Tuesday at 12.00 noon at a press conference organized at CMS Gomti Nagar Campus I auditorium. Shri Kaushal Kishore, Minister of State, Housing and Urban Affairs, Govt. of India will be the Chief Guest on this occasion.

Tue Nov 22 , 2022
46 total views Lucknow, November 22 : Presidents, Prime Ministers, Chief Justices, Judges, legal luminaries and other eminent personalities from 57 countries of the world participating in the ’23rd International Conference of Chief Justices of the world’ have called upon all nations of the world to […] 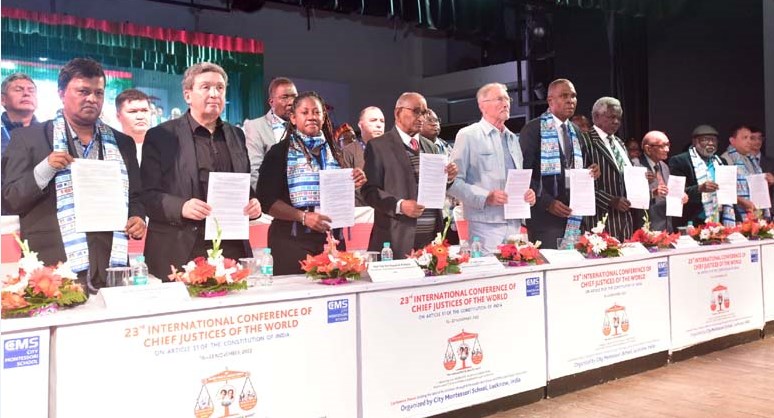