Lucknow, November 28: The three-day International Cosplay Competition, ‘Fantasm 2021’ organized by City Montessori School, Rajendra Nagar Campus I came to a close here today. The winners of various competitions were announced this evening in a scintillating educational-cultural closing ceremony. Student team of BCM Arya School, Ludhiana, Punjab proved their supremacy by winning the Overall Championship of Fantasm-2021, while Vidya Bharati Chinmaya Vidyalaya, Jamshedpur was the runner-up. The objective of ‘Fantasm 2021’ was to provide an international platform to the students of pre-primary, primary and junior classes where they can display their knowledge, skills and talents in an environment of healthy competition. Student participants from schools of Australia, USA, Russia, Nepal, UAE and India participated and competed in various competitions in this three-day event.

Addressing the participants in the closing and prize distribution ceremony of Fantasm 2021, CMS Founder, Dr Jagdish Gandhi said that the process of showcasing the skills and talents of the students which has started with this event should not stop now. He expressed satisfaction that this event has proved to be extremely beneficial in the overall development of students. CMS President and MD, Prof Geeta Gandhi Kingdon also expressed her thoughts and congratulated the participants saying that she is amazed to see such tremendous talent in these young children.

Expressing her heartfelt gratitude to all the participants, their teachers and other invitees, Convenor of ‘Fantasm 2021’ and Principal of CMS Rajendra Nagar Campus I, Mrs Jayshree Krishnan said that the manner in which the creative talent of all the participants students has come to the fore in this event is unmatched in itself. These children will go on to work for the welfare of humanity in future.

NEET PG Counselling 2021: Resident Doctors On The Path Of Protest Against Delay.

Mon Nov 29 , 2021
490 total views Medical college residents throughout the State are in the process of protesting over the delay in PG counseling at NEET. Because of the delays in counseling, the load for residents is growing and their time learning is also being wasted. In response to […] 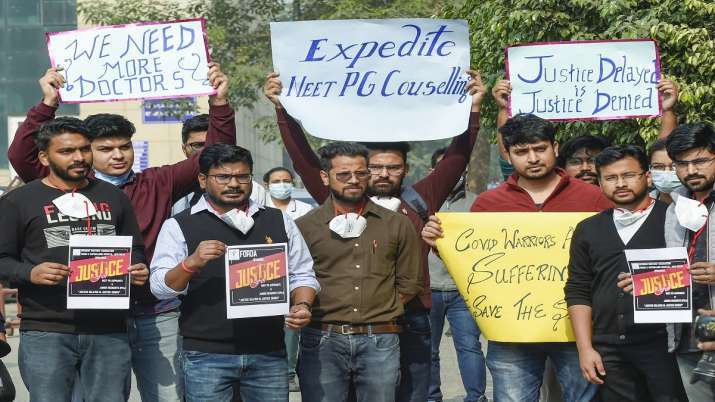