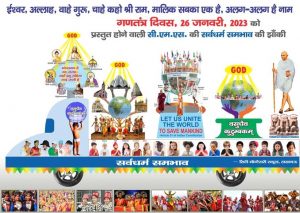 Lucknow, January 8 : The CMS tableau to be taken out this Republic Day, on 26th January will give the message of ‘Respect for all religions’ to the general public. This inspirational tableau based on the theme ‘Ishwar, Allah, Wahe Guru, Chahe kaho Sri Ram, Malik sabka ek hai, alag-alag hain naam’ will propagate the message to the public to imbibe the spirit of ‘respect for all religions’ and ‘Vasudhaiv Kutumbkam’ and make an appeal for a world order which is full of love, compassion and cooperation. This information was given by Shri Hari Om Sharma, Chief Public Relations Officer of CMS. Shri Sharma said that this CMS tableau will inspire the public to love human beings in line with India’s cultural ethos of ‘Vasudhaiva Kutumbakam’.

Shri Sharma informed that the CMS tableau is divided in four parts and each part gives the message of welfare of humanity in a unique way. The first part of the tableau gives message of ‘Vasudhaiv Kutumbkam’ while the second part showcases the Indian spirit of unity in diversity with models of temples, mosques, churches, gurudwaras, Buddhist monasteries and Baha’i temples shown under one roof, giving the message that the source of all religions in one God. Here, students are seen dancing with joy on a song based on ‘religious harmony’. The third part of the tableau appeals for unity in the world as enshrined in Article 51 of the Constitution of India by showcasing a World Parliament, along with the photographs of Kabir, Mahatma Gandhi, Vinoba Bhave, Mother Teresa and His Holiness, the Dalai Lama and giving the message of love for humanity. The fourth and final part of the tableau includes a statue of Father of the Nation, Mahatma Gandhi with his message, ‘Bura mat suno, bura mat dekho, bura mat bolo’. Students are seen sitting around a globe and taking Mahatma Gandhi’s message of ‘Vasudhaiv Kutumbkam’ and ‘Jai Jagat’ to the masses.