Lucknow, 28 February : Representing 55,000 students from all 18 campuses of City Montessori School, the students of CMS Station Road Campus made a strong appeal to maintain peace and order in the world and stop the Russo-Ukraine War. Under the guidance of CMS Founder Dr Jagdish Gandhi, CMS President Prof. Geeta Gandhi Kingdon, and Principal Mrs Deepali Gautam, the students of the school took out a procession demanding an end to the Russo-Ukraine war. The students called for unity and peace in the whole world with slogans, placards and flags in their hands and called upon the world leaders to do everything possible to immediately stop the war between the two countries in favor of the suffering humanity of Ukraine. The posters and placards being carried by the students in this procession had slogans like, ‘Stop War – Have a Heart’, ‘Stop Attacking Ukraine,’ ‘Stop Aggression in Ukrain,’ etc.

On this occasion, CMS students also interacted with the media persons. On this occasion, the students unanimously appreciated the efforts of the Government of India for safely evacuating Indian students from Ukraine and said that this drive should be further accelerated so that all Indian students can be brought home immediately.CMS Founder Dr. Jagdish Gandhi said on this occasion that in the present world scenario when the whole world humanity is sitting on the stockpile of nuclear and biological weapons, we all should think about how we all can individually contribute to bringing about world unity and world peace. CMS President Prof. Geeta Gandhi said, “War has every possibility of escalating and if that happens, the situation could spin out of control. Children’s voices, therefore, must be heard.” She expressed her happiness that CMS students have raised their voices that the conflict is resolved without warfare. Principal of CMS Station Road Campus, Mrs Deepali Gautam said that violence has never been a solution to anything. Peace and unity is the only way. 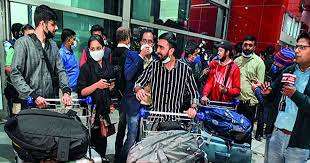