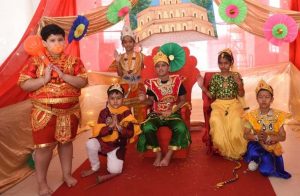 Lucknow, October 22: Over 59,000 students of all the 21 Campuses of City Montessori School celebrated Deepawali in their respective campuses with great fanfare. The main programme was organised at CMS Gomtinagar Campus I where students enacted Ramleela, giving the message to follow in the footsteps of Lord Ram and celebrate Deepawali in its true spirit. On this occasion, students pledged  to celebrate cracker-free Diwali and spread awareness among children about the hazards of fire-crackers. The Principals of different campuses appealed to the entire countrymen, especially the school children, that in the interest of the country, society, environment and for their own health and safety, they should ‘say no to crackers’ and celebrate a safe Diwali spreading the light of unity and dispelling ignorance by lighting the lamps of knowledge in every household.

CMS Founder and renowned educationist, Dr Jagdish Gandhi, while praising the ‘Cracker-free Diwali’ mission of CMS students, said that CMS advocates for celebrating a clean Deepawali against a Pollution-filled Diwali with crackers which spread sound and air pollution.  Every year, a large number of crackers are burnt causing heavy damage to the environment and increasing the pollution level in the air as well as increasing sound pollution by several decibels that is extremely dangerous for humans, animals and plants.  Thousands of children suffer injuries due to crackers and several meet untimely death due to accidents caused by crackers burst on Diwali. He stated that though for the past many years, City Montessori School has been making the society aware about the need to celebrate a Cracker-Free Diwali, it is now that we are getting much support from society for which we are obliged.

Sun Oct 23 , 2022
100 total views Lucknow, October 23 : Five students of City Montessori School, Station Road Campus have secured scholarship worth Rs 20 lakh from the Ministry of Science and Technology, Government of India. Those who are chosen for this scholarship include Anshumaan Tiwari, Gurleen Kaur Chhabra, […]