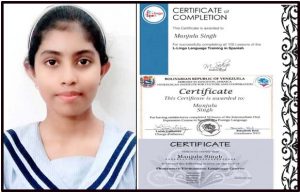 Lucknow, 29 December : Manjula Singh, student of City Montessori School, Rajajipuram Campus I has brought laurels to Lucknow by mastering over 7 different languages of the world. Wizard of Languages CMS Student Manjula has been honored by many international organizations such as the Bolivarian Republic of Venezuela, Elementary Vietnamese Language, L-Lingo Language Training in Spanish, etc. for her amazing talent and special ability. This information has come from the Chief Public Relations Officer of CMS, Mr Hari Om Sharma.  Mr. Sharma informed that on the basis of her talent and intelligence, Manjula has not only gained proficiency in speaking many languages of the world including Spanish, German, Arabic, Korean, Vietnamese, Hindi and English but she has also been working as a coach for the expansion of languages among students and teenagers. CMS Founder and eminent educationist Dr. Jagdish Gandhi expressed great happiness over the remarkable achievement of this brilliant student and wished her a bright future.

Mr. Sharma said that CMS believes that the knowledge of different languages is very helpful for students’ development and upliftment on the global stage. At the same time, it increases their employability and provides them better opportunities for higher education. Keeping this in mind, special arrangements have been made for the students at all CMS campuses to learn the languages of different countries as per their interests. CMS aims at enabling its students to converse in global languages, making it easier for them to interact with and understand people from other countries. Knowledge of different languages is very important for the personality development of students.