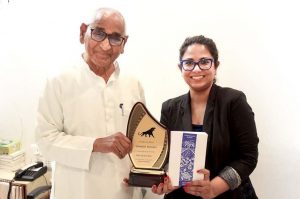 Lucknow, September 25: Ms Urvashi Bundel, an outstanding alumna of City Montessori School, Lucknow, has been honoured with the ‘International Literary Award 2022’ for the category of ‘Poet of the Year’. This award has been presented to her for her well-renowned book of poetry titled “Unapologetically Feminist”. Nominations were received from India, USA, Philippines and many other countries for this award. CMS Founder Dr. Jagdish Gandhi while expressing happiness on this achievement of his student, wished her a bright future. He also expressed gratitude to the teachers of school, who recognize the natural talents of the students and encourage them to move forward in their field of interest. This information was given by the Chief Public Relations Officer of CMS, Mr Hari Om Sharma. He added that at a glittering award ceremony held recently in Delhi, Urvashi was presented a citation and memento for her achievement. The award ceremony was organized jointly under the auspices of Canada’s Ykiyoto Publishing House and Suenos Networking.

Mr Sharma informed that Urvashi has been a student of City Montessori School, Station Road and Indira Nagar Campuses. Presently, she is a law specialist, upholder of human rights and an active social worker. The Japanese Government has honoured her with the MEXT Award. She has also won many other accolades and honours for her literary and poetic work. Mr Sharma further stated that in her book, “Unapologetically Feminist”, Urvashi has lauded the role of women in society, inspiring women to fight for justice and equality and secure their rights. She has highlighted that men and women need to co-operate and work together shoulder to shoulder for growth and development of society. Urvashi has contributed to enriching literature and presenting her ideas with courage and vigour.