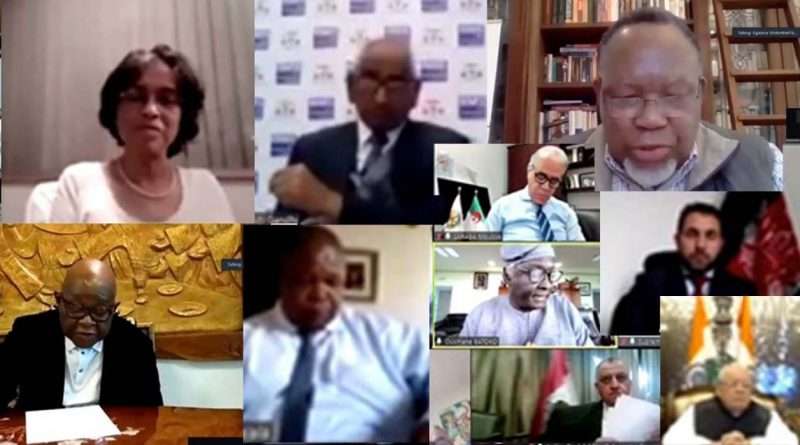 NEET Bulletin (Bureau, Lucknow) November 7 : The second day of the 21st International Conference of Chief Justices of the World opened to a series of enlightening speeches by renowned visionaries and prominent personalities who laid the foundation for discussion and deliberations regarding Global Governance as a post Covid imperative. While on one hand, Rajya Sabha Member Shri Sudhanshu Trivedi; Governor of Rajasthan, Shri Kalraj Mishra and Speaker of the U.P. Legislative Assembly, Shri Hriday Narain Dixit enlightened the eager listeners online with their views of global governance and its pressing need today, on the other hand, members of the World Judiciary rolled out their ideas for global governance and strongly advocated the need for Enforceable International Law and reformation of the UNO to create a more equitable society based on the universal laws of peace, unity and justice. Heads of State, Speakers of Parliament, Chief Justices and Judges from 63 countries of the world gave their wholehearted support to the touching appeal by the students of City Montessori School to safeguard the future of 2.5 billion children of the world. It may be mentioned that the ‘International Conference of Chief Justices of the World’ is being organized online by City Montessori School, Lucknow from 6 to 9 November 2020.

Inaugurating the morning session of the second day of this historic Chief Justices’ Conference, Member of the Rajya Sabha, Chief Guest, Shri Sudhanshu Trivedi explained that conditions in the world this year are far different than what they were earlier and it is only through our collective effort and by embracing the motto of ‘Jai Jagat’ that we can tide over the worldwide Corona pandemic which has devastated economies and taken away lives by the million. The time has now come when we should think seriously in the direction of global governance. The world today is torn apart by environmental degradation and terrorism. If we have to get out of the clutches of deadly pandemic like the Corona virus, we must all come together and form a united world before it gets too late.

Mr Justice Hilario Davide Jr, Former Chief Justice of Philippines while giving his keynote address said that formation of a world government, world parliament and world judiciary with due amendment in UN Charter is required now. It is the duty of the present generation to ensure safety and security of future generation. Mr Kgalema Motlanthe, former president of South Africa stressed upon the problems of the day including climate change and corona pandemic which need global solutions. In a global world society, not only humans but also animals, birds and trees would be protected and development would be sustainable. Dr Pakalitha B Mosisili, MP, Prime Minister of Lesotho opined that corona pandemic has brought to light the gross inadequacy of the government agencies across the world in dealing with challenges. He called for a global paradigm shift in the global governance by means of changes in the constitution of the United Nations so that the regional outfits become part of this agency and a better, safer and cleaner world can be created for our children to live in. Prof A M Oquaye, Speaker of the Parliament, Ghana, said that a new Economic World Order is required for ensuring justice. We need a global government that would solve the problems of inequality and deliver economic justice, he added.

CMS President and Managing Director, Prof. Geeta Gandhi Kingdon thanked all the eminent participants for helping CMS students to grow into responsible citizens and also for making sure that these ideas reach wider audience.

The afternoon session of the Conference was graced with the presence of Chief Guest, Governor of Rajasthan, Shri Kalraj Mishra. In his address, Shri Mishra said that it is important for us not to repeat our past mistakes and take measures to form a New World Order based on World Unity and World Peace and drive out the deadly Corona Virus with our combined strength and wisdom. As it is the deadly disease has already caused untold misery and suffering to the people of various countries. In this state of affairs, the present nature of the United Nations needs to be considered for immediate reform. He called upon the World Judiciary to seriously consider the appeal by CMS students and act with conviction to create a world fit for the next generation, a happy and thriving world for the world’s children by framing world laws and ensuring their speedy implementation on a world forum. The Evening Session was inaugurated by the Speaker of the Uttar Pradesh Vidhan Sabha, H.E. Shri Hriday Narain Dixit. in his address, Shri Dixit reminded the people of the ancient wisdom of India embodied in the principle of Vasudhaiv Kutumbkam (the whole world is one family). He also spoke of Article 51 of the Constitution of India which seeks to foster respect for International Law and encourage the settlement of international disputes by arbitration, as this was the need of the hour.


CMS Founder and Convenor of the ICCJW 2020, Dr Jagdish Gandhi said that an ideal world society can be established only by establishing a World Parliament, a World Government and an International Court of Justice. Only a world body such as a World Parliament can find permanent solutions to the grave problems being faced by society such as poverty, illiteracy, unemployment, terrorism and environmental issues. Referring to the appeal by the CMS students, Dr Jagdish Gandhi said that it is the endeavour of CMS students to seek a safe and secure future for the world’s 2.5 billion children of the world and the generations yet to be born. Children are concerned about the stockpiling of nuclear weapons and other weapons of mass destruction by nations. They are appealing for the formation of a world Parliament and Enforceable World Laws to establish peace, unity and justice in the world, human rights for the world’s children and end of all wars among nations.

Chief Public Relations Officer of CMS, Shri Hari Om Sharma informed that Heads of State and renowned members of the World Judiciary will continue with their meaningful addresses at this World Judiciary Meet and deliberate on how to make the dream for Global Governance for the benefit of all mankind and creation of a New World Order, come true. Parallel sessions are being conducted at the conference on relevant themes connected to the aim of Global Governance and Sustainable Development at this conference. Some of the themes are Reform of Global Governance Structure, Global Citizenship Education, a New Definition of Security-from military security to health, work and social security, Tackling race, religion and gender prejudices, Environment protection and climate justice, The creation of a World Parliament Assembly for U.N. Accountability and Legitimacy, Role of the Judiciary in building a more secure and equitable world and Role of the media in creating a climate of tolerance etc.

Shri Sharma stated that on the third day of this historic World Judicial Meet, Sunday, 8th November, the Deputy Chief Minister, U.P. Dr Dinesh Sharma will inaugurate the Morning Session at 10.00a.m. while the Minister for Law and Justice, U.P. Mr Brajesh Pathak, will be the Chief Guest in the Evening Session held online at 7.00p.m. Apart from this, H.E. Mr Cassam Uteem, Former President of the Republic of Mauritius. and H.E. Mr Jean Henry Ciant, Prime Minister of the Republic of Haiti. as well as several other Heads of State, Chief Justices and Judges will also address the Conference and glorify it with their valuable presence. 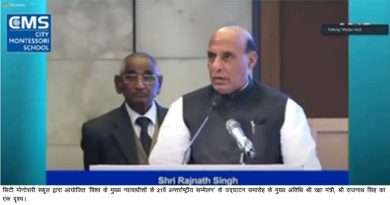 Our first priority should be to provide a safe, lasting and happy future to the coming generations 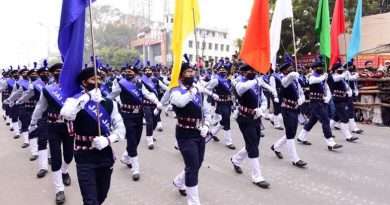