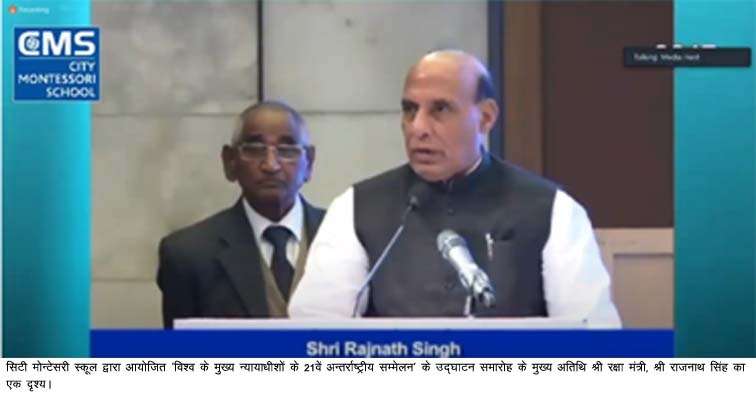 Shri Rajnath Singh, Minister for Defence, Govt. of India
Lucknow, November 6 : The ’21st International Conference of Chief Justices of the World (ICCJW- 2020)’, organized by City Montessori School, began online on a note of grandeur and great eagerness today. On this occasion, the virtual presence of Defence Minister, Shri Rajnath Singh and Mayor of Lucknow, Smt. Sanyukta Bhatia added to the dignity of this historic event. At the ceremonious virtual inauguration, Smt. Sanyukta Bhatia honoured the Former President of Trinidad and Tobago, Mr Anthony Thomas Aquinas Carmona by presenting him with the ‘Key to the city of Lucknow’. Prior to this, CMS Founder, renowned educationist and the Convenor of ‘International Conference of Chief Justices’, Dr Jagdish Gandhi and the Senior Principal of CMS Kanpur Road, Dr Vineeta Kamran, welcomed the benign presence and participation of the Heads of state, Chief Justices and Judges at this significant World Judiciary Meet based on Article 51 of the Constitution of India. It may be mentioned that the International Conference of Chief Justices of the World is being organized online by City Montessori School, Lucknow from 6 to 9 November 2020 in which Presidents, Prime Ministers, Heads of State, Chief Justices, Judges of Supreme Court and Peace promoters of world famous organizations, representing 63 countries of the world, are participating online on the call given by over 55,000 CMS students campaigning for a united and peaceful world to safeguard the safety and security of all the children of the world and the generations yet to be born.

At the inaugural ceremony of this historic conference, Defence Minister, Shri Rajnath Singh said in his message that it should be our foremost aim to provide a safe and secure future for the coming generation and the significant step taken by the Chief Justices and Judges of various nations to unite and move ahead in this direction will revolutionize society and create conditions for the establishment of a New World Order. I heartily congratulate CMS Founder Dr Jagdish Gandhi for raising his voice in favour of important issues like child rights and a better world order. Mayor of Lucknow, Smt. Sanyukta Bhatia said that City Montessori School is truly an extraordinary school which has taken the initiative to carve a new future for over 2.5 billion children of the world and generations yet unborn, by organizing this unique Conference of the World Judiciary and it has also added a new chapter in the history of education by creating awareness for global issues in the minds of its students.

The inaugural function began with the melodious rendition of the National Song, “Vande Mataram” and the School Prayer “I bear witness O My God” by CMS Kanpur Road Campus. Procession of School Band by CMS Kanpur Road students and cultural presentation by the Federation of Love and Peace (FOWPAL), Taiwan were other attractive items on this occasion.
In his Acceptance Speech, the Former President Trinidad and Tobago, Mr Anthony Thomas Aquinas Carmona said that the safety and security of the 2.5 billion children of the world is possible only when there is harmony, peace and unity prevailing in the world. An effective and powerful World Judicial System is necessary for bringing about stability in the world and ensuring long lasting peace, he said. Mr Gerry Arathoon, Chief Executive and Secretary, Council for the Indian School Certificate Examination, New Delhi while wishing for the unprecedented success of the conference, said that it will prove to be a milestone in the journey for world Unity and World Peace.

On this occasion, CMS Founder and renowned educationist, Dr Jagdish Gandhi expressed his heartfelt gratitude towards all the renowned personalities, Heads of State, Chief Justices and Judges who had very graciously accepted CMS’s invitation and assured full support to the cause of safety and security for the world’s children. Dr Gandhi said that it was a matter of great pride for the Lucknowites to welcome these great personalities from 63 countries of the world and listen to their thoughts at this conference. Their online presence will greatly boost our spirits and bring about revolutionary changes leading to a world without borders, based upon friendship, peace and harmony. 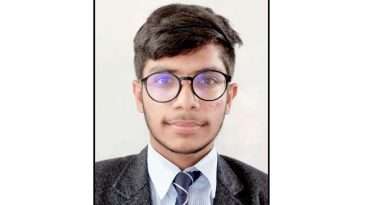 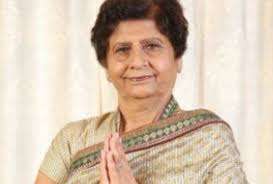 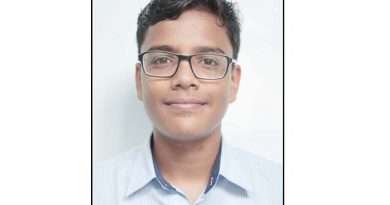 US university offers US$ 1,63,000 scholarship to CMS Student